Bro. George Jackson: Where is My Commendation? 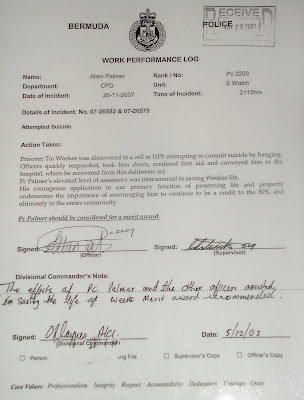 On the 26 th of November 2007, While on duty at the Hamilton Police Station there was a male prisoner (who will remain nameless) being detained at the Hamilton Police Station. While there the young man attempted to commit suicide. The method of self-termination he chooses was to hang himself by the neck using the basic bed linen that was provided by the Bermuda Police Service to bring those who are detain the basic level of comfort. There were no recognizable tell tail signs, that would have alerted any of the officers on duty that the prisoner was suicidal or had suicidal tendencies.

Fortunately for him the prisoner's suicide attempt was not successful, although he came close in that, he went into a state of unconsciousness and the constriction of his airway was almost permanently close, this critical fact could have complicate his resuscitation and thus it made the rescue of the prisoner impossible. To get the victim down from his place of self-execution, ensure that the linen was removed from around his neck, and clear the victim’s airway took the combined efforts of three officers working feverishly to accomplish this task.

The quick and effective action of my colleagues and I ensure that we got the victim down from his place of hanging to the place of resuscitation (the hospital) in good enough time for him to be revived.

As a result of our life saving actions we were given good performance (a written recognition for exceptional or outstanding performance) logs and recommended for a commendation/merit ward, which should have been awarded at the end of 2008 the beginning of 2009. Unfortunately I did not received my merit award, for the critical role I played in preventing the victim from meeting an untimely death, the Bermuda Police Service from a costly and time consuming investigation, bad press, community criticism but most off all the trauma of family and friends. I guess I am the only person who played a role in this rescue who was not so rewarded.

I know it would hurt my friends George Jackson, Bryan Bell, Michael Jackman, and now retired Randolph Liverpool’s hearts to award me a commendation, (which I deserved) after all of the stress I cause them. It is important to know that the Stress I cause the management of the Bermuda police Service was in retaliation to all of the evil they did to me.

Big George Jackson, and the others; Regardless of how you feel about me personally, the fact remains that I work for that and deserve to be given a commendation for my efforts. I will like to have my commendation for the role I played in saving the life of the prisoner and preventing all of the negatives that would have followed. ha ha ha ha.
Posted by Pearson "Crush" Palmer at 12:22 PM 2 comments:

Email ThisBlogThis!Share to TwitterShare to FacebookShare to Pinterest
Labels: Justice 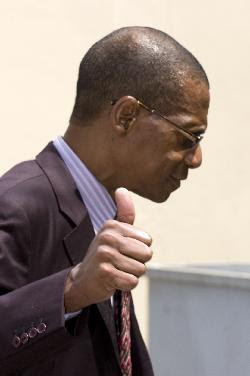 
When my friend Nelly informed me of Julian Hall’s death, I became engulfed with disappointment. I was disappointed for several reasons; reasons which I will go into a little later. Like any good and reliable writer, I did my ground work to confirm the information that was relayed. I later confirmed that Julian was actually pronounced dead about two hours ago.

I can remember when I first heard of Julian Hall, I did not believe all of the wonderful things about him, the disturbing stories about his tribulation and of the brilliance that characterized the man. My disbelief of Julian’s talent was based on the fact that, in most quarters in Bermuda, mediocrity is promoted and held in reverence.

I can remember my first encounter with this Bermudian Icon of brilliance. It was while performing extra (police security) duty at the Bank of Bermuda on Church Street, in the City of Hamilton; but what left the greatest impact and actually converted me as an admirer of Julian Hall was: the speech he made at the 2006 Labor Day rally which was held at the Bernard’s Park. despite his troubled pass he spoke valiantly and without fear. I was amazed by his eloquence, the clarity of mind that was exhibited in his discourse, the logical arguments he made, the love he had for his people, but more so the valiant level of courage he exhibited in challenging the status que that try to secure his demise as an individual, a lawyer, a politician, a labor activist etc. I also listened with interest to the recording of the dynamic speech Julian delivered at the P. L. P’s convention a year or so later.

I have heard of Julian’s rise, his fall and the evil plots that was executed against this man to control and mussel him, yet he defy those who try to silence him, he stood proud and worked for his people. His close political allies disliked his independence of mind and his free will; his political opponents disliked the same qualities; yet when they were in his presence they had no choice but to put away the petty jealousy they harbored in their heart and treat him with the dignity and respect he demanded and deserved.

Julian spent his final years working hard to clear his name of allegations of dishonesty and to change the idiotic law that make it impossible for bankrupt lawyers to practice their profession in Bermuda. This law literally denied this patriotic son of the soil the opportunity to adequately earn a living in the land of his birth.

Many people in different places will want to cast stone at Julian now that he is dead; but like Julian each of us have made bad/poor decisions and mistakes; unfortunately for some, their mistakes and bad decisions were/are highlighted and affects their life adversely. Does that means that we or you are better than the other man or woman because his or her mistakes may have landed them in trouble and your bad decisions, illegal acts and or mistakes did not have such an impact on you? Remember what is in the dark will soon come into the light.

In the Bible Jesus the son of Jehovah said “he who is without sin cast the first stone;” I therefore dear anyone who was intimidated by Julian Hall’s intelligence, his determination, his eloquence, his free will and his love for all Bermudian (even those who designed his political, legal, professional and other downfall) to cast the first stone.

There are not much people that I admire but I admired Julian’s brilliance, his boldness, his courage but most of all I love Julian’s will to fight even against the odds.

Let me take this opportunity to convey my condolence to Julian’s family and the people of Bermuda on the lost of an intellectual icon. May you rest in peace Julian Hall; I hope your people (Bermudians) remember you always.
Posted by Pearson "Crush" Palmer at 2:17 PM 2 comments:

Email ThisBlogThis!Share to TwitterShare to FacebookShare to Pinterest
Labels: Death

Rebellion to Tyrant is obedience to God

“Rebellion to tyrant is obedient to God” can the truth in this statement be proven. Let us look to the bible, to see if this statement can be proven.
Religious leader who hides behind the cliché, God’s will, will be done are nothing more than cowards. Jehovah bestowed the responsibility on us to ensure that his will is done on earth and when such is beyond human ability he assured us he will step in and take care of business.

Now let us take a look at some example that most conscionable human were in supports of; examples which occurred in the distant and recent pass:
One thing I know for sure and that is; if anyone asked these men if the suffering they undertook for their cause was worth it. They will answer with pride and let you know they will do it again if they are needed.

If from the examples provided above, we agree that rebellion to tyrant is indeed obedience to God, then obedience to tyrant is rebellion to God. It is time that people who have tyrant in their lives, such as a bosses, a political leader etc. to get up and rebel against any such tyrant that bully them. When we rebel we must expect retaliation from the tyrant in the same way John the Baptist, Daniel, the three Hebrew boys, Martin Luther King, Mahatma Gandhi and Nelson Mandela suffered; hence we must be prepare to suffer at the hand of a tyrant. But when all is said and done, we will experience a quality of life that will be better, richer and more rewarding; so much so, that we will ask ourselves why didn’t I rebelled sooner.

We must always remember that “a tyrant will always find pretext for his tyranny and it is useless for the innocent to try to reason to get justice when the oppressor intend to be unjust.”

All these men knew exactly what Jehovah expected of them and what was his desire for his people. They also knew that Jehovah has no hands or voice but there (our) hands and voices. What is Jehovah’s will for his people? The American Declaration of Independence out lined the answer to this question perfectly. “We hold these Truths to be self-evident, that all Men are created equal, that they are endowed by their Creator with certain inalienable rights, that among these are Life, Liberty, and the Pursuit of Happiness.” If there is a person or group who act against the principles out lined in the quote in any way may be a tyrant.
Let us take a look at another part of the Declaration of Independence of the United States of America “whenever any Form of Government becomes destructive to these Ends, it is the Right of the People to alter or abolish it, and to institute new Government.” In other words any time a government is corrupt, and or is unable to provide the rights as outlined above, in such cases, it is the rights of the people to alter or abolish that government and institute new government. This is very powerful counsel coming from the fathers of democracy.

I will end with these two un-dissected quotation: Rebellion to Tyrants is Obedience to God"
The United States of America Declaration of Independence:
"We hold these Truths to be self-evident, that all Men are created equal, that they are endowed by their Creator with certain inalienable rights, that among these are Life, Liberty, and the Pursuit of Happiness. . . whenever any Form of Government becomes destructive to these Ends, it is the Right of the People to alter or abolish it, and to institute new Government, laying its Foundation on such Principles, and organizing its Powers in such Form, as to them shall seem most likely to effect their Safety and Happiness."
Posted by Pearson "Crush" Palmer at 9:58 PM No comments: