Dr. H. L. Gates: A Victim or an Aggressor 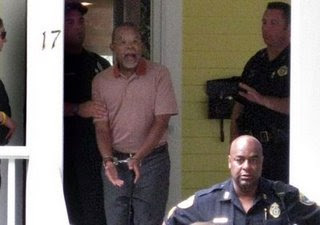 One of the issues that have received a lot of media coverage in the United States of America (USA) and should be of concern to people every where is the incident involving the arrest of a black professor of Harvard University: Dr. Gates by a white police officer: who is attached to the Cambridge Police Department. This incident give raise to many questions, and generated a great deal of tension; both racial and political. Although it seems as if this matter was resolved over a round of beer on the front lawn of the white house which is located at 1600 Pennsylvania Avenue, Washington District of Columbia.

Many people hold fast to the opinion that Boris Gates was responsible for the escalation of this incident, while others say that the officer acted outside the perimeter of his powers. Yet all of the pundits fail to go into any detail to justify their claims.

Here we have a situation where a police officer went to investigate an incident of a possible burglary. On arrival at the scene, the police officer approached the home and was met at the door by the suspected intruder. I Guess the officer stated the purpose for his presence to the alleged intruder and asked him to proof that he is who he said he was and was indeed the official custodian of the premises. The alleged intruder went into the house accompanied by the officer, retrieved two pieces of picture identification and presented to the officer in an effort to verifying that he was who he declared himself to be.

The big question that must be answer is: was Dr. Gates actions enough to satisfy the officer need to ensure that the law was not violated, being violated and the professor, was who he said he was and had a lawful right to be in the house. There are a few indicators that tell me that Mr. Gates effort was more than satisfactory in convincing the police officer that he was indeed who he said he was and that he was the lawful custodian and resident of the house in question.

The following are the indicator that officer Crowley was convinced of Dr. Gates’ residential status:
The second question that must be answered is; did The Harvard professor commit an offence?

From an objective evaluation of the evidence and the piece of law I have conclude that Dr. Gates did not commit any offence; he may have shouted at the police officer in his effort to get him off of his property, he may have also expressed some personal opinion by trying to tie the officer’s behavior to that of race, (the officer being white and Gates being a black man) and it very well might have been, regardless of what was said, It is possible that the general behavior of Dr. Gates may have hurt officer Crowley’s feelings, but hurt feelings is not a lawful reason for taking away an individual’s liberty and arresting them.

Each officer has an obligation to be guided by the law in the execution of his or her lawful duties. There are times when an officer can affect an arrest without that person committing an offence; and they are:
Other than for the above reasons every officer ought to affect an arrest on commission of a crime or on suspicion that an individual has committed a crime.

Now that we have concluded that Dr. H Gates did not commit an offense or in any other way violated the law, we can conclude that officer Crowley under false pretence arrested Professor Gates behaving as if his arrest was lawful. It is important for police officer to understand that if someone hurt your pride, they may not be in violation of any law or any body of law and no one should be arrested because their action or words did some damage to your pride.

Although the Professor is a renowned IV league School professor, Dr. Gates was not the professional in this situation. Officer Crowley was the professor and had a professional obligation to resolve this issue according to the law of the land, his training and the professional ethics that should always govern his behavior.

Police officers are professional people and they must allow professionalism to guide their behavior and their action, they must also allow commonsense to prevail and they must stop abusing the power that is entrusted to them for the protection of the community. Just remember that, each time you act unprofessionally your behavior and action impacts on the institution you serve and affect the very people you have sworn to protect and serve.

To my fellow police officers, remember each time we insults an individual only because we are in a position of authority, or inflict blows on a member of the community for any reason other than in defense of ones’ self or a victim of a crime; and even then he or she has to be responsible with his or her actions, or their actions may be constituted as abuse of one’s power and thus, your actions may result in the commission of an offence or a crime for which you may be charged and tried.
Posted by Pearson "Crush" Palmer at 11:44 AM No comments: