An Abuse of Power: Is Bermudian Getting The Justice They Ought To?

From my stint in Bermuda, I have interacted with many Bermudian who were detained in police custody on various drug smuggling offences. In most cases the alleged offenders would have had a package apprehended by the police from one of the three renowned international courier services that operate on the Island of Bermuda: DHL UPS or FedEx.

Then I had an experienced that caused me to question the methods used by and the integrity of the Bermuda Police Service when dealing with the citizen of Bermuda; more specifically in the area of drug related offences. The questions I am trying to get an answer to are as follows:

Have the Bermuda Police Service been honest and forthright in dealing with the thousands of individuals who have had their packaged searched, seized, were arrested, their activities investigated, their phone tapped, their homes searched, their friends and family inconvenience with questioning and in some case detained, the subject charged, prosecuted and in most cases the accused person went to court and plead guilty: in order to avoid the inconvenience and the negative attention of a long trial? Have they been honest in their dealings?

From my experience most Black Bermudian are of the opinion that the court system is tailored to deny them justice and as a result they refuse to fight for their rights. These are occurrences the presiding Jurist, the police, the defense lawyers and the prosecutor appreciates very much, for these court officers it is an opportunity to reduce the excess cases load but most of all, they get out of court early. This come at the expense of Justice and too often resulted in the conviction of innocent citizen, which is not good for justice. I often wonder what happened to the philosophy that it is better for ten guilty men to go free than for one innocent man to be convicted.

In April 2009, after speaking to my sister via telephone to arranged the shipment of my new passport which she was in possession of after collecting it from the passport office in Kingstown, St. Vincent. The phone calls between us were to make arrangement to ensure that we were on the same page with the shipping of my travel Document (passports) to me. The arrangement was made for my passports to be shipped to me via Federal Express (FedEx) which I should have received on the 7th April 2008. The FedEx agent in St. Vincent who is my good friend, ensure she properly label the package detailing the content of the package on the place provided for such.

Sensing that something was terrible wrong I constantly tract the movement of my package using FedEx on line tracking. When the package arrived in Bermuda, I immediately called FedEx office to make arrangement to collect the package. However I was informed that the package was in the possession of the delivery agent. Later that morning the delivery agent contacted me and informed me that he has a package for me. I made my way to his location where I signed the necessary document and collected the package. When I collected the package, I was in the company of one adult female and two children.

Isn’t it the procedure of any legitimate shipping company FedEx including; to inform their customers if a package was damaged and its content missing? FedEx workers could not claim they did not know that the content of the package was missing, because there is a manifest (airway bill) that outlines the content of the package and its value. Isn’t it procedure for any legitimate company FedEx included to inform their customers if their package or part of the shipment were seized by the police if doing so will not interfere with an on going investigation? And aren’t they (legitimate shipping company including FedEx) professionally and legally obligated to inform the customers if such seizure was affected if the shipment or the content of the shipment did not contravene any law?

Isn’t it the procedure for any well structured police service or force, if the seized a package or the content of or part of the content of a package to first inform the owners and initiate an arrest if any law was violated.

On Wednesday 9th April 2008, I duly brought to your attention and I have also taken the timeout to show you a package I received from your delivery service, which was tampered with and part of the contents namely two St. Vincent and the Grenadines Pass Port (one that was canceled with an American Visa in it, and a new Pass Port that is in compliance with the USA standards) in the name of Allan H. F. Palmer was missing form the package; a package your delivery person admitted he received from the warehouse as he delivered it.

And as you have informed me on recognizing the tape on the package that the tape used is that which is used by custom official to reseal a package after a package was examined by the Bermuda Customs, and as was confirmed by the customs officer who states that the person who use the tape should not have use the said tape on the package as they are making a transition from that tape to a new tape.

I do not have to inform you, of the importance of someone in my position having a Pass Port.

In my effort to get a speedy replacement pass port I am requesting a letter from your company verifying that a passport was shipped from St. Vincent and the Grenadines to Bermuda via Federal Express and that package was tampered with and the Pass Port removed from the package.

Such a letter will aid in me getting a speedy replacement. Let me take this opportunity to thank you for your speedy cooperation in this urgent matter. Thank you.

The big questions that must be answered are:

How did the Bermuda Police Service official know, that my passports were coming into Bermuda on that particular date?

The Bermuda Police Service was illegally listening into my phones conversations.

Did the Bermuda Police Service obtain lawful authority that instructed the FedEx management to hand over to them for the purpose of searching and to confiscate the content of the package?

Did the Bermuda Police Service get such lawful authority from a presiding Jurist or Justice of the Peace? If the answer to this question is yes; what was the information they provide to the Jurist to justify the issuing such authority?

Every moment of that day is fixed in my memory for two reasons the first reason: it was the day my passport was stolen by the institution I served faithfully and for the mere fact that although such a adverse occurrence it was also my best day in Bermuda. 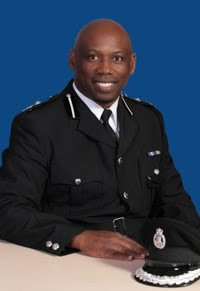 Mike Jackman one of the B.P.S management and the proud face of unethical practice. (It Pays to be Dishonest)

I can clearly remember seeing the smug look of victory that was plastered on the faces of the main perpetrators Assistance Commissioner of Police: Mike Jackman and his accomplice Inspector Haynes.

Now if Mike Jackman and his accomplices were willing to break the law and possible knowingly provide fraudulent information to a presiding Jurist to obtain a lawful authority in order to stress an honest police officer only because he was strong enough to live his conscience and refused to fall in line with their dishonesty and to comply with their illegal instructions. To what lengths will they go to cause the arrest and potential imprisonment of a member of the community who the have an even more serious beef with.

Mike Jackman and the others are paid to uphold the law, if they can disrespect the authority with which they were entrusted, use fraudulent means to persuade a presiding Jurist to do their dirty biddings and to violate the law at will when it is in their egoist interest; then who is safe from these rough police officers. How many Bermudian were arrested and charge and prosecuted base on the dishonest actions of rough police officers. Now the big question is, who is going to police the police?
Posted by Pearson "Crush" Palmer at 11:54 PM 3 comments: