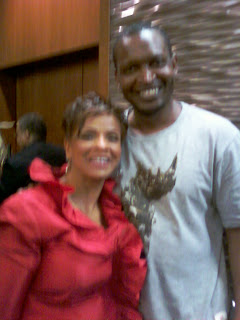 It is always a pleasure to be entertained; however, when your entertainment is a professionally planned live performance, by exceptionally talented musicians, you can expect a thrill that no drug can provide. Tonight, I had the distinguish pleasure of attending a live concert; compliment of New York City Government, who is instrumental in providing brooklynites with free entertainment. The audience was favored with performance by the talented Antoinette Montague; a beautiful singing sensation with a voice that makes you wants to stand to your feet and give her an ovation, each time she opens her mouth. She entertained the audience with many popular Jazz numbers as well as a song that was written by her titled: Behind the smile, this song is featured on her new album. 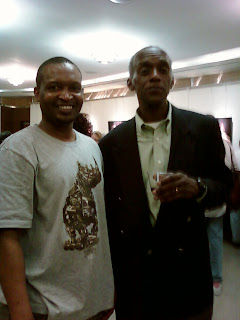 Allan H. F. Palmer with Tammy James the renown musical Director of the Duke Ellington band
One of the tremendous talents that providing music for Antoinette was her musical director: Tommy James. Tommy is a skillful musician, whose fingers create magic when they tickle the ivories. Tommy “magic Fingers” James is a musician of tremendous skill and class as was demonstrated, by his performance tonight. He also holds the auspicious position of Musical Director; with the Duke Ellington band that is still touring. 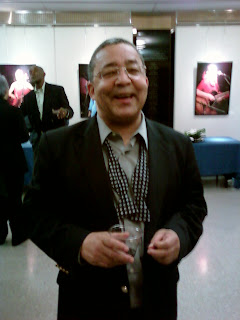 Bill Easley the master Saxophone, the Flute and the clarinet
Bill Easley: is known as the Hurricane; he is so named because of the way he creates his magic. Bill is an accomplished Broadway star, but tonight this accomplished musician mesmerized the audience with his skills on the Saxophone, the Flute and the clarinet. It is evident that he had mastered these instruments. Bill blows like a tornado and is capable of knocking you off of your seat; then knocks you over and over and over with his sweet melody. Bill Easley is currently in the play titles: This side of Paradise. 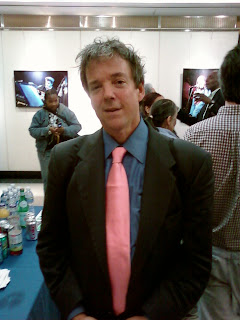 There is the cool but deadly Bass player; Jon Barr, who is a tremendously talented bass musician. From looking at Jon one will come to the conclusion that he allows the music to engulf him. It is not hard to see that Jon and his double bass has a love affair and together they produce great melody, which was clearly seen in his performance but more so when he did his unaccompanied solo. 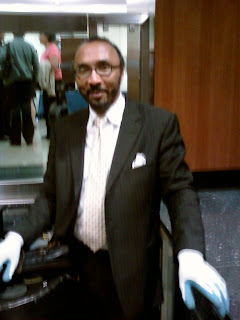 Master Drummer Payton Crossley
Then we come to the magician himself Payton Crossley. This talented yet unassuming percussionist is surely a genius on the drums. I have seen Payton done things and create sound from his drums I have never seen or heard before. Payton has a tremendous ability and he is not afraid to do what he can to enhance the music and the over all performance of those he is called upon to accompany.
All in all tonight was a good night; I get to rub shoulders with some of New York’s greatest musicians. What next for me in this City? That is the question I cannot answer.
Posted by Pearson "Crush" Palmer at 5:25 AM No comments: