Lt. Cornel David Burch May Have A Valid Point 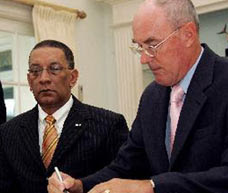 The earring wearing politician and ex-regiment officer: Lt. Col. David Burch came in for some heavy criticism as a result the remarks of the Public Safety Minister, who was calling for the police to become more aggressive or get tough with Bermuda’s criminals. This was due to the fact that the Col. used what can be considered an inappropriate word: violence. Unfortunately the Colonel is a portfolio holding Member of Parliament and was acting in an official governmental capacity, when he made the statement that offended some in Bermuda.

It is important to note that Minister Burch was only expressing the sentiments of the majority of law abiding Bermudians, and I must say that his message was not lost in the use of the word violence. However his message was lost in the political mêlée that followed. What was and is troubling is the fact that even the silliest of people understood what the Colonel meant. It is strange that the remarks of David Burch in his efforts to address the criminal situation of Bermuda: a tiny island that is experiencing a growing violent crime problem, that is daily becoming far beyond the capacity of the island residence to physically and emotionally deal with. Yet, his call for the police to become more aggressive in dealing with such violence would be met with such criticism, from the people who are also affected. What is unfortunate, was the manner in which such issue was dealt with by the opposition politician and representative/leaders of some social organization in the community. Instead of supporting the minister call on the police to be come more aggressive in the matter of deal with such acts of violence; whilst informing the public and the minister of his poor choice of words; but a big rocket was made and a premature call for the Colonel's resignation.

What was an opportunity to create a meeting of the minds (the politicians the police and community) was lost because supposedly responsible individuals chose to take a serious public concern and play politics with it. Yes Lt. Colonel Burch choice of words were poor, but even the least educated could have seen where he was going and understand his intent when he made his statement.

No one has the rights to play political and other games with the safety of the community; no one ought to be so selfish that he or she put his or her political aspiration above the needs and safety of his/her people and country.

Criminal activities affects everyone; and it is primarily the responsibility of the government to ensure that the machinery are in place, well oiled and operational, for which to stamp out or control crime and criminal activates within the community. It is therefore the responsibility of each member of the community (which also includes politicians) to ensure that such machinery is properly uses.

The good news is that the problems that Bermuda is currently facing are reversible or correctable. We have seen similar and graver problem were brought under control in many country and cities. Case and point are: 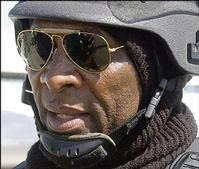 From these examples we see that the worst crime situation are reversible. However the big question is; are the politicians and people of Bermuda going to leave this situation until it get out of control before they find the guts, the wisdom and the willingness to do what has to be done? or are you all going to wait until it escalate into a situation like Jamaica before some meaningful action is taken? The Bermuda Police Service needs the support of the general public; as well as the government if they ought to be effective in the fight against crime.

The Divisions within the Service:

There are numerous divisions within the service that must first be addressed. I know there are many who will try to refute the fact (because it will reflect on their managerial ability) that the Bermuda Police Service has many critical differences that affects the effectiveness and the efficiency of the service. Most of which are discussed in the little groups of the affected.

The issues of Race:
One of the divisions that impact the effectiveness of the Bermuda police service is that of race. The Bermuda Police Service is divided racially and such divisions are reflective of the slave plantation of the soon to be forgotten pass. Take a look around and look at the ratio of the racial composition that patrols the streets of Bermuda in the day and in the night, look at who shows up to your house to deal with your burglary, theft, assaults and your domestic disputes.

Now, lets take an honest and objective look at the racial composition, of the police officers that works in the so call high profile offices and important departments such as Fraud Squad, Financial Crime, Marine Section, Public Order Stores etc. as well as the racial composition of the officers with cushy assignment that afford them to have every night and weekends off. It is important that you are not fooled by the quoter system.

When I entered the Bermuda Police Service, I quickly noticed the reverence with which the Caucasian officers were awarded. At that time I had the opportunity to speak to my supervisor about my observation as it relates to the disparity between the treatments that was awarded to the different races. I also took that opportunity to inform my supervisor that I will not be settling for any treatment less than the treatment that is afforded to the white counterparts.

Training:
It is important that the Bermuda Service change the approach and the type of training that is awarded to the members of the institution. The Bermuda Police Service teaches its members how to be cowards , to run away from danger and how to avoid confrontation; hence the reason why the crime problem is spiraling out of control. Where I am from police officers are paid (though very little) to face danger and to confront the criminals.

If you understand the criminal mind, you will know that these people pray on fear. If they are aware (which they are) the police (the guardian of the community) are not courageous enough to confront them and take the correct course of action that is needed, not because they don't know but because they are afraid; the criminals are going to use that to their advantage. This is outlined in detail the document A Standard for Change: by Allan H. F Palmer.

These learnt behaviors (cowardice) do not only affect the quality of service the community receives it affects the speed at which officers get to certain incidents especially violent incidents. Do you think that it is by coincidence police shows up to most Violent incident in Bermuda after the fact. lol.

The Mark pettingill also speak of the budget cut that Bermuda Police Service received, however I am not convinced that such cut although a large sum, should have any impact of the service operational or training. most of the senior members of the Service are like women (sorry ladies) they compensate for their inability to actively perform in their promoted capacity by going shopping for expensive office furniture and other equipment for their offices. The funds that are waste for this purpose can now be directed to other use.

To Mark Pettingill and the others who pretend to love Bermuda. Your action are showing and will show, and such negative behaviors are not evidence of love.

Posted by Pearson "Crush" Palmer at 11:19 AM No comments: