Carl Neblet, The BPS Commissioner of Police and A Case To Make Public; Private Medical Records. 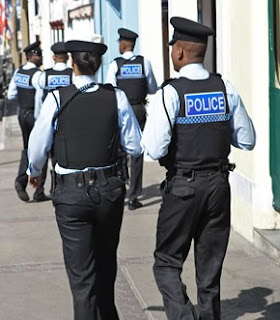 Bermuda Police On Duty
It is my hope that Carl Neblet and his supporters, do not think that I am against or that I in any way dislike him (Carl). In order to set the record straight, I must declare that I think Carl Neblett is a very nice person. Unfortunately for him; his personality does not provide him with the nature that is needed to effectively confront the problems and issues of the Bermuda Police Association (B.P.A) in the manner they should be dealt with; a manner that will bring lasting solution to most of the issues the Association's members are faced with. As a result, the men and woman of the Association are misled and misrepresented. My opinion of Call as a person and Carl Neblett method of operating as head of the BPA are different and it in no way means that I will not be critical not of Carl Neblett the person but of the silly and avoidable graft and decision he continue to make.
Let us take a brief look at and in the process consider the latest saga that is currently being played out within the Bermuda Police Service, where the Commissioner of Police (C.O.P) have decided to take two police officer to civil court. This new court action that was brought by the commissioner of Police, is designed to force the said officers to reveal to him their medical records. This request was made to and was denied by the officers who are being taken to court after they have been on sick leave for more than two years now.
Although I think the steps Commissioner De Silva is currently taking are strange ones, I would believe that he is following legal counsel. The police act has within its pages, the means by which such issues of prolong illnesses can be resolve in a manner that can bring closure to such matters, without the bitterness than the current course of action may leave within the ranks. It is not my intent to delve into such issue in this article.
I am sure that COP and the attorney General are aware that certain information are deemed confidential and no court of law will order there release unless it is in the interest of public safety or other critical matters, No court of law is going to violate the community's rights and set new court president to satisfy an employees curiosity.
What caused my underwear to become tied up in knots, was the below extract from the Royal Gazette. In an interview with the Call Neblett the leader of the BPA the organization that is endowed with the legal responsibility to look out for the interest and protect the rights of the members Bermuda Police Service below the rank of inspector.
Asked about the latest court action, Acting Detective Sergeant Carl Neblett of the Police Association (BPA), which represents the interests of officers, said: "As far as the BPA is aware, this is a civil matter between the Commissioner of Police and the plaintiffs.
"The Bermuda Police Association is not involved in this upcoming case in any way. Two of the officers involved in this upcoming case have not notified or approached the BPA and we do not know who their respective lawyers are."
There are several disturbing factors in the short quote of Carl Neblett, that was recorded in the Royal Gazette article.Together let us take a look at this issue from the prospective of the officers involved, Neblett’s response and the actions of the BPA.
This is a civil matter between the Commissioner of Police and the plaintiffs. Firrst I will address the quote
1. It is unfortunate that the two police officers are called plaintiff by their most senior welfare representative. This is a clear sign that Call Neblett and the BPA have already distance themselves form those involved even though they so call plaintiffs are bring forced to surrender their rights. and even though the Association is fully unaware of the facts of the matter.
By virtue of the foregoing characteristics the outlined dynamics makes this issue a BPA matter.


2. Mr. Neblett form your prospective as a constable, a member of the BPA and as a prominent Leader of the BPA, and from the BPA prospective; the parties involved in this matter are not plaintiffs: they are first your colleagues and second they are BPA members those whose interest you volunteer to look out for.
3. The BPA does not represent the interest of the officers. Well that one I know from experience, the BPA represents the interest of management because, it is easier for the Association to be on the side of management for many reasons that has nothing to do with "securing a promotion".
4. The BPA is not involved in the upcoming case in anyway. The fact that it is a civil proceeding does not automatically exempt the BPA from working on behalf of its member in a work related dispute with management. Carl at lease you know that the level and or functions of the proceeding do not take away the responsibility of the BPA to represent its members.
5. The officers involved have not approached or informed the Association of the matter that is brought against them. Give me a break Carl, this mentality is low; it matters not whether the persons involved brought the matter to your or the attention of BPA. A person who has any genuine concern for the people they represents often forget about personal pride and does what is right. That is what a true leader of such an organization will do. They will not wait on the victims, for an invitation to provide representation to a colleague in trouble but on finding out of the problems will ensure that they get to the bottom of the matter and offer any support they can; this is what true representation is all about.
Let me make it clear, the affair of the three police officer as it relates to the presentation of their medical records and the court proceeding that is brought against them are in deed the business of the BPA and they should be in the forefront with the members; unless for reasons not given the by the BPA have cause the Association to have make a conscious decision to disassociate themselves from the matter. The Bermuda Police Association must adopt the attitude that whenever information is brought to their attention by whatever means, they (the executive) must make an effort to contact the member who is experiencing such difficulties even if is to lend moral support.
Posted by Pearson "Crush" Palmer at 4:52 AM No comments: