Katrina Lanay "Trins" Flood: Please Rest in Peace and May your Children be Blessed 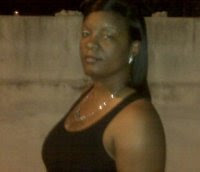 While perusing the Royal Gazette today, I came across a story that was captioned: Woman becomes Island seventh road death. It was saddening to learn that it was my dear friend Katrina Layna "Trins" Flood who met such a sad, sudden and tragic death. Unfortunately; she die on the 12th June, 2010, while recovering at the KEMH from injuries sustained from an accident she had seven days earlier.
I got to know Katrina Flood, who was only twenty eight years old when she die; through a police related incident. Although I knew Katrina was not driving the car that committed the traffic violation, for which she was ticketed; she choose to take the rap for her friend who was driving the said vehicle without a driver license. Unfortunately there was nothing we could have done to prove the contrary. But that is the type of person I have come to know Trins to be; one who will go the extra mile for her friends.

From my interaction with Katrina while dealing with the Traffic Violation, I dubbed her the respectful rebel. For although Katrina resisted out counsel and the ticket which was given to her, she did so with respect and with humor; it was because of this experience that I was forced to admire her and as a result; I quickly became friends with Katrina and her traffic violating complies.
Although Trins and I was not best buddy, we had a common bound and a mutual understanding; which was base on respect for each other. I have had many conversations with Katrina and at times she will seek me out, for my opinion on different matters. As my custom is, I will be frank and honest with her, not telling her what to do but guiding her into making the correct decisions. Like each of us, Katrina Flood was not perfect; she was a down to earth person, who was straightforward in expressing her thoughts and she was good by nature. She was very knowledgeable about the Bermuda under world and its activities.
Katrina’s childhood experience of losing a mother at a very tender age, which went untreated, left her traumatized. The psychological trauma that she had to bore, at times got the better of her and was responsible for her early rebellion. I can associate with Trins, for like her, I was the baby of the family and I also lost my mother at the tender age of seven years old, to death.
The last time I saw Katrina, who always find pleasure in heckling me about something or sharing a laugh with me was in August 2008, (Just before I left Bermuda). She was working at the Market Place Mini Mart in the City of Hamilton. By this time Katrina would have surpass her detractors prediction for the length of time she would have hold onto the job at Market Place, to the point where she was training new cashiers, and supervising the other girls on the cash line. This accomplishment made me proud of Trins and I did not hesitate to let her know how proud I was of her achievements. I will challenge her to continue to do what she was doing and encourage her to aspire to bigger things. I had no doubt as to Katrina's ability to achieve anything she wanted too, for she was intelligent and street wise.
Although my mother prepared me for her death the emotional trauma was tremendous. I do not know what preparation Katrina’s mother made to cushion her children from the psychological impact of her death but as I have experienced there is no preparation that can adequately prepare a child of tender age for the death of his or her mother.
Because of Katrina’s sudden and tragic death, I am forced to conclude that she may not have prepared her children for her death. The foregone conclusions give raise new concerns, about Katrina’s kids. Now I am very concerned about Katrina’s children, for it is very possible that they may not get the type of psychological care and love that is needed to help them to cushion the impact of losing a mother at such a young age. There are no substitute for a mother’s love, but continuous love, care, and positive vocal and touch re-enforcement can surely go a long way to help children in such situation that Katrina’s children are, to have a successful journey on the road of normalcy.
To the sisters of Katrina whom I know very well and the other members of the family please accept my deepest sympathy. I am requesting that you do what you can to let Katrina Lanay “Trin” Flood children be a living positive memory of who their mother was and what she was surely aspiring to becoming.
Posted by Pearson "Crush" Palmer at 1:45 PM 1 comment: